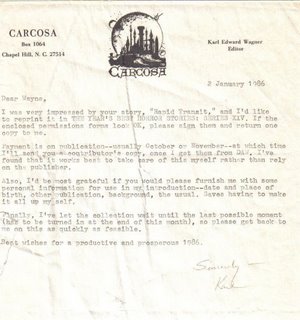 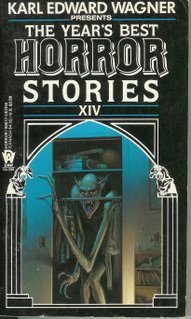 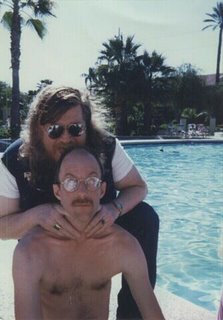 In the time between my two blogs, October 16th marked the 12th anniversary of the death of Karl Edward Wagner. This is the guy--and don't let above photo circa Phoenix, 1993, befuddle or bemuse you--who found that story of mine in GRUE#1, the one that really TRULY sucked (if you look back on things, no dialogue, little character development), but he knew I had the imagery there, he could feel my Chicago, and knew I deserved a chance to swim with the sharks. When you hear me use the phrase 'commonplace book' instead of 'journal,' it is because it was Karl's phrase. Karl put me in the next decade's worth of Daw's YEAR'S BEST HORROR STORIES, taking tales that were not in mainstream magazines, but small start-ups like DEATHREALM and (NOT) ONE OF US, who would continue to survive for ten years or more, yet back when Karl and I first met, most every book was a saddle-stitched book the size of a phone book from out in the boondocks. Peggy Nadramia, Mark Rainey, John Benson, they published the stories first. Karl found me a bigger audience, gave me the chance to expose Chicago the way other city haunts like Nelson Algren and Frank Norris did in earlier decades. Rest in peace, Karl Edward Wagner. Christ knows you didn't find it here...otherwise you wouldn't have been a writer. Your pallbearer, Wayne
Posted by Wayne Allen Sallee at 11/26/2006 11:26:00 PM