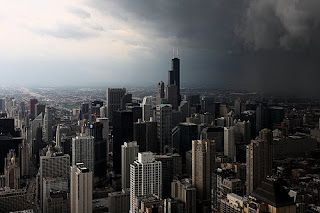 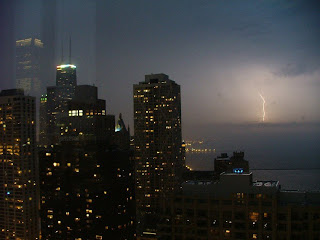 I know that song by The Standells is about Boston, but screw it. This is my blog. And we had lots of dirty water. See that first photo? We were under that big cloud in the upper right for maybe 60 hours, and there it was, the remnants of Hurricane Ike playing holy hell with pretty much everywhere. Our power went out on Sunday, the water was not cleaned up until Tuesday. Munster, Indiana is pretty much due east of here, and they had flooding like I've never see, just as I've never seen here since July of 1996, a day I remember because it was the same day TWA Flight 800 exploded over Long Island. Several homes have had gas explosions while still immersed in water and the aeriel footage is eerie, roofs poking up and one vacant spot with a few beams floating where the street should be. Spoke with my Auntie Dorothy in Shelbyville today, she told me Kentucky had no rain but gale winds up to 80 MPH, schools are still closed, the Gene Snyder Freeway (one big ass road) is blocked off, and the Humana Hospital Building (I believe the tallest structure in Louisville) had a two day power outage. So I've not blogged or emailed many people because I've been busy catching up on my ghostwriting and Salem Press jobs after way too much time walking things out to the garbage and building up my middle-aged biceps.
Posted by Wayne Allen Sallee at 9/18/2008 10:12:00 PM

Somehow, it's hard to image anyone letting Chicago go the way of New Orleans.

From the look of those pictures, though, your biceps will get plenty of work rowing on the oars! :-)

The bad thing is...we actually need that rain here in the South in a very bad way.

We tend to think of Hurricanes as coastal problems, but I see that's not true. Wow, Ike and Gustav really did a number on a bunch of inner country towns.

You're writing a short story about this when you should be ghostwriting, aren't you? C'mon, 'fess up!