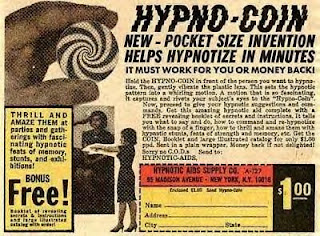 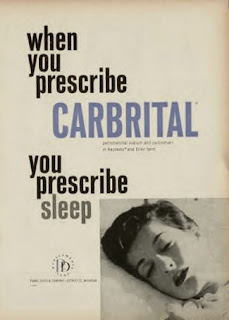 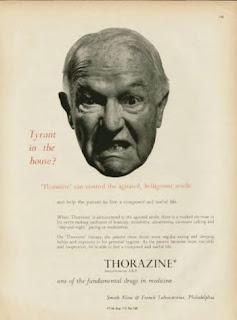 In some Midwestern town, some kid used the Hypno-Coin he bought to make his mother OD on her Carbital, get his tyrant father to down some Thorazine with his blended scotch, so that the kid could look at Coca-Cola beauties and enjoy the company of his giant frogs. If you know what I mean.
Posted by Wayne Allen Sallee at 7/03/2008 10:37:00 PM 6 comments: Links to this post 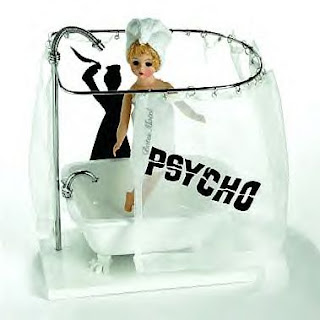 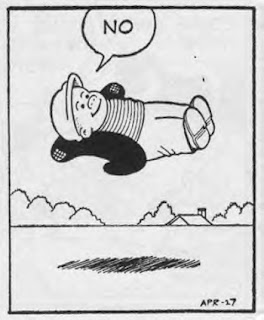 My friend Lynn is a wonderful human being--kind, thoughtful, supportive, able to leap tall metaphors with a single bound--but she has never, ever believed me when I've told her about the latest Weird Thing* I've encountered.

"You made that up. Or you were drunk. Or hallucinating. You didn't really (hear/see/read) that!"

To which I've only been able to reply, "Lynn, I did NOT make this up. I'm not that smart."

And I'm not. What I am is a Weirdness Magnet, which can be terribly, terribly inconvenient** since no one ever believes me!

Halloween 1980 found me holed up in my wretched little Boston apartment with a bottle of cheap bourbon, a bag of potato chips, and my sole source of entertainment besides books:


No stereo system, no television set, just a portable radio my parents had given me for Christmas several years before. Needless to say, I spent a lot of my non-working hours listening.

Though there was a slew of decent FM stations in Boston, I listened to WCOZ (now WJMN) for "When You Need... KICK-ASS... Rock 'N' Roll..." (album-oriented rock mostly from the 'Seventies) and WBCN, "The Radio Station That Flogs Dead Horses!" (featuring a more varied format but especially emphasizing the then-emerging punk and New Wave scenes). WBCN's late night DJ, Jerry "The Duke of Madness" Goodwin, was a favorite of mine for a number of reasons, not the least of which was his intro which could easily last a half-hour, but also because he played some seriously demented stuff.

Her response? The standard, boilerplate "You made that up. Or you're drunk. Or hallucinating. You didn't really hear that!"

And with no witnesses and no supporting evidence there was nothing I could say to convince her otherwise.

So, back to Halloween 1980, WBCN, the Duke of Madness, and this...this...song...I heard. A country/western ditty (which was pretty damned strange for WBCN to begin with) about this psycho killer and no, it wasn't "Psycho Killer"; no amount of alcohol could warp "Psycho Killer" into a country/western ditty. It was weird and wild and wacky and weird, so of course I had to tell Lynn about it.

"You made that up. Or you're drunk. Or hallucinating. You didn't really hear that!"

I spent years trying to track down those two songs because I knew, I knew what I heard was real and not some psychotropically-spawned fantasy; unfortunately, no luck. In the early days of the Intarweb I tried again, but no luck; there wasn't yet sufficient critical mass to encounter something that offbeat and that obscure.

Until I ran into Wayne Allen Sallee.

Ah, Wayne. Writer of horror, denizen of Chicago, worshipper of John Agar, repository of all things obscure, twisted, and weird. Our interests overlap in frightening ways and while we were talking about strange and unusual music I asked him about this song I was beginning to think I really had hallucinated.

"Oh, yeah! That's "Psycho," written by Leon Payne and performed by Jack Kittel.***** It's been covered by Elvis Costello (Almost Blue) and I'll be glad to send you a tape!"

And friends, you would have thought he'd handed me the Keys to Heaven, so delighted I was to receive this confirmation/affirmation! A few weeks later he sent me the Promised Tape (filled with all sorts of other suitably offbeat stuff****) and lo! I was rocketed into a Fourth Dimension of Obsessiveness! However, as Fate would have it, by this time I had lost contact with Lynn and thus was I deprived of my chance to perform the Vindication Dance (pat. pend.).

And "Psycho--the Song" references abound on the Web.*****

So here we go, the song I didn't make up:

***** Psycho
Can Mary fry some fish, mama
I'm as hungry as can be
Oh lordy, how I wish, mama
That you could keep the baby quiet
'Cause my head is killing me

I saw my ex- again last night, mama
She was at the dance at Miller's store
She was with that Jackie White, mama
I killed them both
And they're buried under Jenkin's sycamore

Don't hand me Johnny's pup, mama
'Cause I might squeeze him too tight
I'm havin' crazy dreams again, mama
So let me tell you 'bout last night
I woke up in Johnny's room, mama
Standing right there by his bed
With my hands around his throat, mama
Wishing both of us were dead

You know that little girl next door, mama
I believe her name was Betty Clark
Oh, don't tell me that she's dead, mama
'Cause I just saw her in the park
We were sitting on a bench, mama
Thinking up a game to play
Seems I was holding a wrench, mama
And then my mind just walked away

***** From Beyond "Monster Mash"--The A.V. Club's Definitive Mixlist:
Penned by Leon Payne (the songwriter behind "Lost Highway" and others) and recorded by Michigan country singer Jack Kittel in the early '70s, this song was made semi-famous when Elvis Costello cut it as a B-side. But the straight-faced original is even more chilling than Costello's version. There's something about the way Kittel deadpans lines like "Don't hand me Johnny's pup, mama / 'Cause I might squeeze him too tight" that really sends chills up the spine...