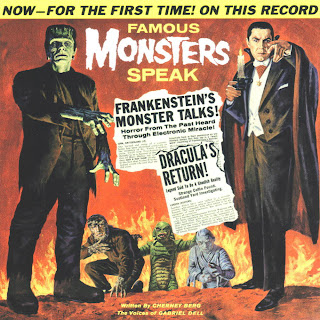 The above illo has nothing to do with this post, but I don't think anybody really needs another photo of Bubbly Creek. The same cousin who had that HORROR OF PARTY BEACH picture book did have this Famous Monsters vinyl back when we all lived on Crystal Street, so I am vaguely aware of it.

Re: Charles Unruh. Mixed comments, but I know I have a list in my head (which starts with ME, if I ever thought of hurting anyone else), but I'm agreed that it would be a simpler thing, though still wrong, if the hecklers and the hounders were killed instead of random people, as is our case with the drive-by shootings that happen about three times a week. How different would Columbine have been if Klebold and Harris had simply killed the three or four assholes that mocked them? Always the wrong people. I also forgot to mention that Unruh would have gone to church that day, he was dressed in a suit and bow tie while he shot everybody. But he saw the missing gate first.

Also, re: Dead Teenagers, the cassette. I forgot to mention Elvis singing "Long Black Limousine." On the short list for my favorite Elvis song AND song in general. Girl leaves town to be famous, dies in a car crash after a big party, and she returns in that big black car she told everyone she would. It's from an album, BACK IN MEMPHIS, recorded in early 1968. A lot of people overlook this album, because the Elvis Singer Special came out later in the year and both covers show similar backdrops. The blues on that album is amazing, wedged into a crack in reality's past.

Anyways. Harry's girl, Diana, passed on the info about a ghost story contest the Tribune was running, with a deadline of midnight yesterday. No prizes, some stories will be posted online. I hit the 700 word max mark off by one, deleted an adjective three lines up. I might lengthen the ending, should I try to sell this at a later date, but not by much. Enjoy the tale.

It wasn’t that far gone that I wrote an essay about places those of us might haunt in the afterlife. Not in a bad way, more along the lines of revisiting, well, old haunts. Maybe a tavern at the corner of Rockwell and Lithuanian Plaza, present day. Or outside the Orange Lantern at Division and Wolcott back in 1954, with the servicemen returned from Korea and flirting with the dice girls in the autumn glow. 1954, because that was the best year for you. Laughter and discreet smooches beneath the ZIMNE PIWO sign.
Myself, I plan to haunt Bubbly Creek. Specifically the bridge near Archer Avenue, that black monolith now covered with pastel graffiti loops and jagged territorial warnings. I’ve always been fascinated by the artery that is Archer, and of all my memories of Nite Owl bus rides long before the Orange Line. The old Chinatown, signage for Ray-O-Vac batteries, Chinese Maid and Ping’s Iron Works already ghosting into the brick walls of factories in the early 1980s. Taverns of times past, the Quinn Street Inn and The Doghouse, the street squeezed tight before widening just before Ashland.
Bubbly Creek ran beneath Ashland, beneath the Stevenson Expressway, the wayward south branch of the Chicago River. Methane bubbles from rendered cattle back when everyone in the neighborhood worked at the Stockyards. This was the place where I found my solitude. Where I’d write and observe.
Where I’d carry my long thoughts.
I’d get off the bus on a Saturday afternoon in the dead of winter, climb up the gravel and stand on the bridge, staring at the vanishing point towards the lake, the Sears Tower a smudge in my left eye. Sometimes I’d feel the thrum of an as-yet unseen Amtrak train, most often it was just the wind and I, Chicago’s wretched, howling hawk.
A swirl of mist when I exhaled through my mouth. And when the delivery trucks and cars streaked with grey and white had passed, I could yell for the simple sake of yelling. I’d hear my echo from the walls of a nearby factory, its’ windows like broken teeth. One time, I climbed down the other side, this time in the spring, and was surprised to find a Frigidaire with a missing door in a tangle of downed branches. On a lower shelf, copies of LOOK magazine, mid-60s from the articles listed on the covers. Pages sagging from rain or worse.
The creek was my muse, each season of every year I would get on the next bus, and then go to the Huck Finn’s on Kedzie and write my brains out. And I would drink coffee like a fiend.
Sometimes I wondered if people thought I might be a ghost myself, parishioners from St. Bridget’s or denizens of the Archer apartments seeing me as a recurring wraith.
When the Orange Line elevated line began operation in 1993, things changed. The Ashland station came on the scene with bright lights and commuters at all hours. New town houses were built to allow owners an easy ride to their jobs in the Loop.
My haunt was gone.
But I could still write about its’ past, though it wasn’t the same as living it.
Back in May, I was returning home from the northside, taking the Western Avenue express bus to the El. I was heat beat and antsy at an unfamiliar train station, and of course I took the wrong train. We passed 35th, I realized my mistake, and found myself at a deserted Ashland station. Bubbly Creek visible in slivers below me, lit by the moon.
A rush of relief as I saw a Midway-bound train at the vanishing point. Turned to surprise as I heard my name, spoken next to my ear as if in secret. I whirled and saw nothing but sharp shadows. A fading mist at water level, wrong for the season.
Echoes became the wheels of the approaching train. I hurried through the open door, knowing someone had found the intimacies of Bubbly Creek before me.
Posted by Wayne Allen Sallee at 10/25/2009 11:00:00 PM 3 comments: Links to this post