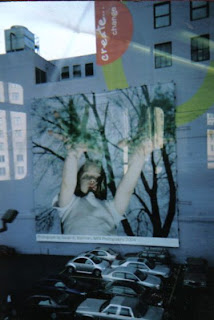 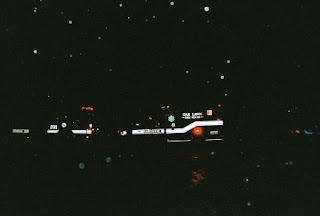 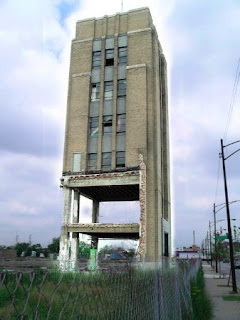 First: what follows is my March 28th contribution to STORYTELLERS UNPLUGGED. I have described the story about the lady in Princeton who found that bloodied purse a week or so ago. Some of you might want to read the essay, as the purse lady is only part of it. For those who just want general World Wide Wayneness, the first photo is of a building that seemjs to be four-dimensional. The second I took outside my window, it was two squads and I knew it would come out strange, or not at all. The third is of the flying girl, a billboard that was up for several years on a building near, I'm guessing, Harrison and where the el wavers from State to Wabash. The photo itself startled many a traveler while it was there. Well, that's it for up here, the actual post that means something is down there. 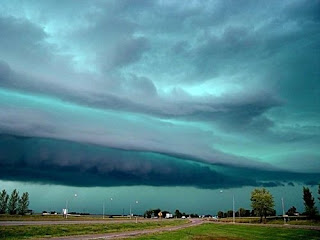 You all know my father was a Chicago cop for 31 years, and many of my anecdotes or actual instances of grief come from either him or his partners. A cop sees you on the worst day of your life. I write about these people to get an understanding of why things happen they way they do, or why PEOPLE let things happen the way they do. Back in 2005, I took Amtrak out to Princeton, in Illinois's Bible Belt, to visit Trey and LuAnn Barker, who run Green River Books. Trey is also a Bureau County sheriff's deputy. We drove past the wind turbines that Memorial Day weekend, and he pointed out a stretch of road to me, then a bit later, a wooded area. Like most wooded areas in Illinois, it looks as if the trees are skidding to a stop before the edge of the road. A teenage girl disappeared in 1977 and her skeleton was found in that crop of trees the following spring. On the morning the girl went missing, a woman was driving on the aforementioned road and saw a purse on the side of the road. It looked as if it had fresh red nail polish on it, but she did nothing about it. It was a time of no cell phones and the farm roads in Illinois stretch for miles. Plus, this woman had an appointment with her hairdresser. On the way back she found that the purse was gone. It was then that she called the police, wanting to know if the purse had been turned in, even arguing that she had "seen it first" as the police record shows. It's obvious that the purse belonged to the missing girl, the nail polish might have been blood, and it was the killer who came back for the purse. Rarely am I sickened by the actions of another. The people demonstrating in Oakland, mocking the death of four officers last Sunday? Watch the news here any night. Police are the devil incarnate.
Then came time to write a story for HELL IN THE HEARTLAND, an anthology by Annihilation Press, with each story set in Illinois. I wanted so bad to write a story about this woman, who still lives near Princeton. Hell, she's only about five years older than me. But I couldn't. I wasn't able to think of it as I would if the same thing had occured in Chicago. It was a purse at the side of the road. Was the woman wrong for not calling the cops or even the property owner? And yet there she is, living out her days, and I can't get her out of my head at times. I created a fictional story for the anthology, one about a man who tracks down a priest who abused him as a child. When he gets to the church in the small town, he finds that someone had already killed the priest. I define redemption in a funny way, I guess. I'm redeeming MYSELF, because I cannot speak for the victims. Homicide cops will say that they work for God, but all writers can do is remind readers that certain indignities occur. I want to write about the woman who wanted that purse in 1977, and if you want to know the truth, all of you, at times I find myself walking up to her porch and fighting the urge to kill her, just ask her, why? The hairdresser appointment was more important? Seriously? But then, as in my story about the priest (who reflects any of a dozen child rapists in the Chicago Archdiocese), I see myself walking up to purse lady's porch...and I find that someone else has already killed her, out of outrage or simply a petty, small town argument.
Posted by Wayne Allen Sallee at 3/27/2009 11:40:00 PM 5 comments: 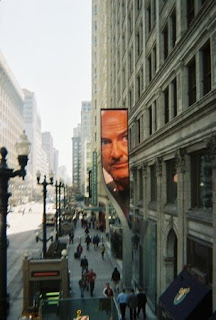 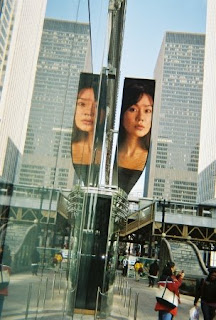 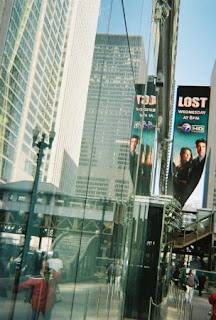 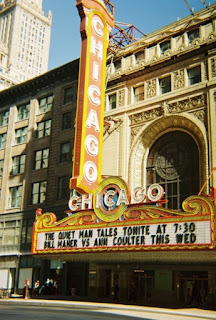 Most of Chicago is a grid and so there are many ways to get a decent vanishing point photo, either from street level or on the el platform. And, yes, I'm bringing up LOST again only because a really cool karmic thing happened today, and LOST is all about karma. I had purchased a few of my own books through Amazon, first time ever, I've been wanting get extra copies of FOR YOU, THE LIVING and PAIN GRIN, then decided what the hell, I'm down to one dog-eared WITH WOUNDS STILL WET. Today I get a reply from the seller, as well as a refund notice from Amazon, reason being "karma goodness." The guy knew me, liked my work, and decided it should be on the house, a pay it fwd kind of thing. (I'm keeping his name out of this post to make it even MORE karmic, like a complete and mystifying event). Anyways. I just love that goofy thing attached to the ABC studios where the old State-Lake theater used to be, and, well, you ALL know about how I feel about teal. So I had to take some mirror photos of several LOST scenes, as well as one of the always magnificent Terry O'Quinn from the steps of the el. The studios are right across from the Chicago Theater and I liked the way the shadows were falling so I took the photo and it came out just as I saw it. What va cool thing, though, getting a free book from a stranger. Where's Rod Serling?
Posted by Wayne Allen Sallee at 3/27/2009 12:06:00 AM 4 comments: