I'm not a crying man, but I cried last night when I read this off of Huffington Post. I thought of Buddy the Mitch, who died at home and had years of arthritis. Those who follow me on Facebook know that I use my right hand, the one crippled with cerebral palsy, to sketch and post in a group called Right-Handed Comments. Feel free to join the group. John and Schoep is still a group on FB, as well. I can't imagine how Mr. Unger feels, after having Schoep for eighteen years. 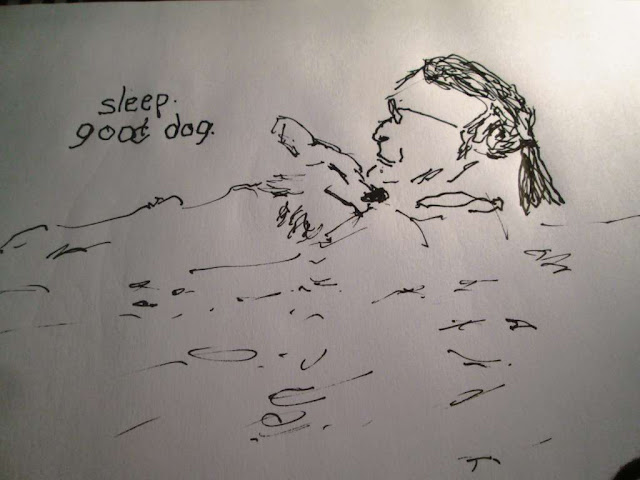 An arthritic dog, who became an internet sensation after he was pictured being cradled by his owner in the warm waters of a lake, has died.
The image of Schoep lying in John Unger’s arms in Wisconsin's Lake Superior melted hearts across the world.
Unger would regularly take the 20-year-old hound to the water in order to lull him to sleep and give him respite from his painful condition. Tender: John Unger gently cradles Schoep in the warm waters of Lake Superior
On Thursday Unger announced on Facebook that his beloved companion had passed away. Within 13 hours the sad news had been shared nearly 20,000 times.
The original image, which went viral after being published on Facebook in August last year, saw touched readers send gifts, artwork, cards and money from across the world.
The acts of kindness saw Schoep go from facing euthanisation - because Unger could not afford to pay for his medication and vet bills - to benefiting from a new although brief lease of life, thanks to various therapies including laser treatments.