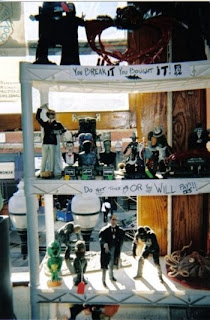 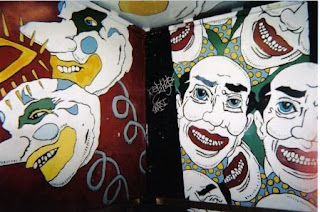 I correct myself, the old gypsy woman died of a stroke, but she had the stroke a few days after starting the fire while smoking. This was 1949, the hotel was in Philadelphia. Linda Darnell died from burns she rec'd while smoking, too. I've never been able to come with a good phrase, like I did with "Shotgunning oneself can be referred to as going out the HemingWay." A few people have mentioned this joint that used to be up on North & Milwaukee. I bought my Universal Monsters tie there. They sold 8mm reels of Japanese monster films. Gone now, sadly. The bottom photo is of the inside of the hand-crank elevator that led to the second floor.

This morning (Tuesday) at around 3 AM, NORAD found it extremely important to send three fighter jets circling past the Sears (that is, the WILLIS Tower), and then landing at Midway, maybe two miles due north of exactly where I am sitting right this second. Bad enough I have to deal with the unmarked helicopters on a daily basis. I had gone to bed at 2 AM, so was pretty much still awake for the airial screeching. This caused me to then have a dream in which I lived in an inverted waffle cone of vanilla ice cream and Frank Gorshin was my neighbor. Yes, I know. I'm still trying to connect the logic dots. Kinda wish the people in charge would have mentioned the jets, I'd have closed the windows and downed some NyQuil. Not that I don't appreciate jets at night, I just don't need to think they were scrambled to chase a UFO and the aliens would hide out in my yard, one of them anal-probing me while the other did wheelies with my Schwinn.
Posted by Wayne Allen Sallee at 7/21/2009 11:50:00 PM 3 comments: Links to this post