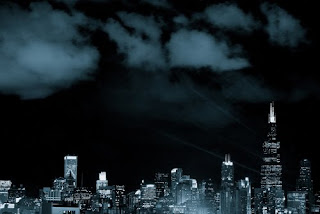 Here's my monthly entry from STORYTELLERS UNPLUGGED. Man, this month just shot into the stratosphere...

I have a road trip, of sorts, ahead of me in a few hours. A zig-zag across the transit system of Chicago. I’m heading up north, but first I have to take the 55th Street bus to an artist friend’s place and drop off a few autographed books. There is a raffle Sunday night near a restaurant off 18th and Halsted where a woman was killed by a hit-and-run drive after leaving work. The money raised will go towards a reward. The neighborhood is still Polish, with the Mexican population a little to the west. So there will be the Pulaski bakery across the street from a ZacaTacos. A KFC that, last I saw, still had an original bucket on a pole that read “The Colonel’s.” I knew the guy, he lived down Route 66 from my Auntie Emma in Shelbyville. True story. Further down, 55th becomes Garfield Boulevard, and its one of those things where you can tell someone’s background by if they refer to the street by either name.

I’ll backtrack from 55th to Midway Airport, take the Orange Line to the Loop, then switch to the Blue Line and head towards O’Hare Airport. Right off the Irving Park stop, at which I’ll hit street level, I’ll walk towards Waveland and Kedvale to visit my friend Joan VanderPutten and her husband Tom. They are out here from Tampa to see their daughter Joy. Married and with a child, I recall when Joy was a peanut. The family used to live in Shoreham, on Long Island, and there were numerous occasions where a carful of writers attending I-Con or the Stoker awards would pile into their home. And Joan was about the third actual person I met at my very first convention, and the six degrees of separation started there. My life in Chicago was different, I knew artists, not writers. And so it is I always think back to that...that newness to it all when I talk to Joan on the phone (she has recently recovered from lung cancer) or every few years up north, as both of us have long abandoned the big conventions.

I was introduced to Karl Edward Wagner by Peggy Nadramia, and he took me under his wing later that first day. Then Peggy, editor of GRUE, introduced me to Kathleen Jurgens, who published THIN ICE, who then took me to task for the violence in my story “Rapid Transit,” which appeared in GRUE#1 and that year’s edition of YEAR’S BEST HORROR. (My father had his first stroke the day my copies came in the mail–directly from Karl, always from Karl–and he thought my story was titled “Taffy Apple.”) Some memories from that year are not good ones, worse thinking my father would then have a second stroke during brain surgery soon after, both at the age of 54.

It was Kathleen who introduced me to Joan, who happened to be talking with DC editor Julius Schwartz and SU alum Elizabeth Massie. I felt in over my head, I had never been anywhere but Shelby County, Kentucky, as my folks never had money back then. Saw my Grandaddy every Father’s Day and that was it. Karl came back and introduced me to my mentor, Dennis Etchison, who gave me a copy of a book he edited, THE CUTTING EDGE. He told me to bring it around during the autograph party later that night. I kept bouncing back and forth between the pros and those I felt more comfortable with, the small press bunch. Imagine that? Beth Massie not even a breakout writer in Dave Silva’s THE HORROR SHOW yet. Hell, Joe Lansdale wasn’t even that well known yet.
Funny story time. I have my book, which Dennis had already signed. The big line was for GoH Ramsey Campbell, so I got to talk with Richard Matheson and his son, Joe, Karl, Tom Monteleone, it’s hard to remember who all was around back then, and then I came up to Peter Straub. He had an old-timey quill pen. And when he went to sign my book, the one with ten or signatures in it already, a huge blop of black ink about covered the page. I let it dry behind Karl’s table, so the pages wouldn’t stick, and Ramsey Campbell, feeling sorry for my predicament, stopped signing, came over, and signed the page opposite the blop, which was no crazier than half the stunts I pulled in those days. Memory lane, as they say. I’ll bet Dave and a few others might recall some of those small press mags. And I found it strange that, for that first year, I had only known female writers, to add to the male artists I knew. Funny thing, that. I met Brian Hodge the following year, and that was the year I actually talked with Etchison and Karl at the bar or near the piano, as they knew me, the scrawny punk with the Tweety Bird receding hairline and the Larry King glasses, from the previous year.