Dobie Gray at Wayne Manor? Give Me a Beat, Boy, and Free My Soul! 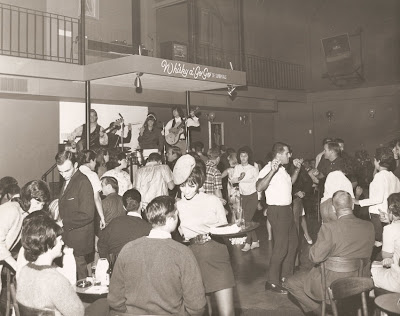 WAYNEMANOR
Latest Update: July 5, 2010
All of this nifty stuff has been created by Corry Arnold and Ross Hannan with the help of Garth Lewis.
The Wayne Manor nightclub in Sunnyvale, at Washington and Murphy, was a unique slice of Bay Area music history. Sunnyvale is the town just South of Mountain View, which in turn is just South of Palo Alto. Washington and Murphy is roughly between El Camino Real and Central Expressway (Alma), next to Los Altos Town Center and the train station (now the Cal Train station). Although Sunnyvale is in the heart of Silicon Valley, in 1965 there were more orchards in Santa Clara County than chip factories, and Sunnyvale was just another pleasant but growing community.
Club owner Joe Lewis had bought an old bank building on South Murphy. As told by his son Garth, Joe initially opened the club in late 1965 as a South Bay branch of West Hollywood's famed Whisky A Go Go, although little trace of the Sunnyvale branch has survived beyond this wonderful photograph of the Joel Scott Hill Trio and Joni Lyman with a young Bob Mosley on bass. Looking to re-launch the club in January 1966 with a new theme, Joe took his 11-year old son's advice and created a club based around DC's Batman comic book. Conveniently, soon after the club opened ABC-TV debuted its Batman TV series. Although the show only ran for two years (from January 12, 1966 to March 14, 1968), it had episodes twice a week and was an immediate camp sensation. Wayne Manor served alcohol and was an adult discotheque, but the suburbs were growing and there weren't very many rock clubs catering to the South Bay (Palo Alto's Big Beat was probably the only direct competitor).
The club was decorated like the Bat Cave, and dancers were dressed like Bat Girl or Catwoman. Various acts headlined, but the club was structured like a Las Vegas nightclub, with a band headlining from Tuesday thru Sunday, sometimes staying for weeks at a time. Of the acts we have identified as playing Wayne Manor so far, we can see a clear multi-cultural policy was applied to the booking of acts (Dobie Gray, The Coasters, Rivera Brothers, Sly and the Family Stone).
Posted by Wayne Allen Sallee at 6/05/2011 10:11:00 PM 2 comments: