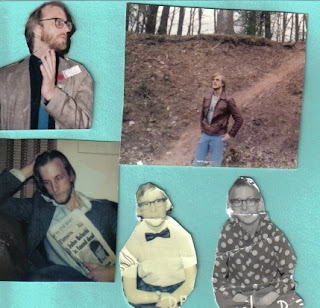 New slogan for our cable company: "Comcast...It's like Payback!" A day after Ike and the only channels I get our, I swear to Mitchum, Lifetime For Women and Game Show Network. How many episodes of CARD SHARKS and JOKER'S WILD can you watch? I decided to post these photos that fell out of an old frame, I cut myself out of various shots. Me with that John Hurt in BODY HEAT hair getting all artsy with the Belushi headline, one of those Polaroid Land cameras. A photo of me SOMEWHERE in Pennsylvania in 1980, a bus ride from college to a nuclear demonstration in DC that attended so as to write an article for the university paper, I think I had just gone to the bathroom in a Hardee's. I read Frank Herbert's THE JESUS INCIDENT along the way and when the bus lost a tire in Toledo we were not allowed into the rest stop because about 95% of the riders looked like Caucasian versions of Cheech & Chong and pretty much people on the interstate ramp were getting contact highs off the fringe jackets. Then there's me in school photos. Yes, there's the bow tie, but I am still trying to figure out why I was sent to school wearing purple pants, plus purple shirt with yellow polka dots, never mind on photo day but on ANY DAY EVER and why the heck didn't I just run away from home and join a circus? I already had my outfit. There might be another photo there, its late and I forgot. Feel free to make up your own flashback anecdote...Wayne
Posted by Wayne Allen Sallee at 9/15/2008 11:48:00 PM

That woods picture looks to me like a serial killer returning to where he's buried his victims. Anyone who would be dressed as in that picture with the polka dots would surely be traumitized enough to grow up to be a serial killer, or at least a serial insulter.

And I think I found an early baby picture of you here.

'Why didn't I join the circus? I already had the outfit.'

Priceless! Thanks for that!

And do you have a hat like Ned Racine, for when it all starts coming down on your head? :-)

I try verrrry hard not to remember anything (that I can remember) from my hippie days, it all gives me the creeps (and fringe does too). :-p

Have I already posted here today?

I never read THE JESUS INCIDENT. I think it was the title that bugged me. I'm not religious and avoided any overtly religious fiction for the longest time. And Herbert wrote some great little novels, too, that were better than his friggin' DUNE books. Stuff like THE GREEN BRAIN, and SOUL CATCHER.

I'm with Charles!
I never read The Jesus Incident either...Did you like it?

Capcom: I can't recall Racine's hat, was it one like Kolchak wore?

Hemlock and Lana: TJI is a good book with a good concept, but the sequel was not good at all. Maybe it was the secondary pot smoke in the bus that made TJI good, though.

Oh, "the hat" was one of the ways that Matty got inside of Ned's head to trust her. Ned had said to her that sometimes it seems like the sh*t keeps falling non-stop on your head (or something like that), and then one night when they drove to the beach, she gives him a box with a really nice hat in it.

Soooo, I was just thinking (after your bad day there, and since you mentioned Body Heat) that maybe you need a nice felt fedora like that to keep the sh*t from falling on your head too. :-)