All The News That's Print To Fit 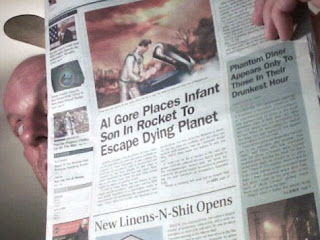 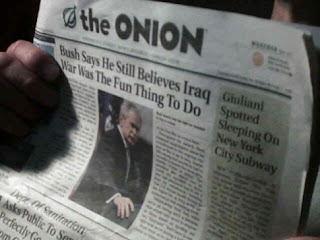 The heat index hit 95 today and so I thought what better thing to do than get six hours of sleep and then walk to the bus stop eating a mini-bagel, then realizing I forgot my bottled water. I had to go to my crazy doctor today, not that he is crazy, rather everyone who sees him is crazy. I just gets my three month scrip for the bipolar meds, swipe a few pens (because that's the way I roll), and pony up twenty dollars because I guess I have that doe-eyed killer clown look that causes doctors to feel sorry that I have no medical insurance and not charge me trillions of dollars like a few of the other patients. Then I went downtown, just because I wanted to continue to swelter and get occasional whiffs of bachelor ass on the train--the effect is that of smelling salts--and visit Graham Cracker comics. Trailer Park of Terror Earl had called to tell me I had a DC Archive book that came in, and I grabbed a few Onions. Then I went and saw The Dark Knight. I have never seen a Batman film in the theaters, I get enough angst-ridden hitched dialogue when I'm talking to myself in the mirror. Well, a few weeks back, a friend commented on how he could not believe that Heath Ledger was that THING. And yet I was still taken aback, at times trying to see the actor under the makeup. The tongue darting towards his scars, the greasy hair. I couldn't do it. Seriously, if I had been in space for the last several years (not an unlikely possibility) and I saw the film (back on Earth) and was asked who played Joker, well, I'd have needed several dozen guesses, after ruling out the obvious, Ernest Borgnine, Abe Vigoda, either of the Olsen twins, Mr. Food. The film itself was OK, like I said, I'm not that big on Batman. But sonovabitch. Best Joker ever. Now I'm taking it easy and catching up on my reading. The doomed planet headline just gets funnier when you read that the Al was using his "given name" of Gore-Al (Superman is Kal-El, Son of Jor-El, Grandson of Sunn-El, yep I'm a geek). A fun day. And I didn't almost electrocute myself once...Wayne
Posted by Wayne Allen Sallee at 8/01/2008 10:46:00 PM

Gotta love the Onion-- I just about spit beer through my nose when I saw those headlines.

I know that there is a statue of Elvis on Mars. It's true.

Yeah, they'll have to retire The Joker, now. Anyone who tries to follow that act...shit...it can't be done.

Heheh, hilarious Gore-Al thought. Indeed, let's see how much he reeeeeally believes what he's saying. Can he be as faithful to his beliefs as Abraham was?

Agree about Ledger, he was incredible IMO too. It's difficult to think about in real-life terms, but he played the psyhcopathic temperment as an embodiment of complete evil abandon in a way that I've never seen it played elsewhere yet. Psychotic behavior as calculated, you see everywhere, but this seemed different. Not that the Joker didn't calculate, but he seemed to calculate without thought, if that makes any sense. And I don't mean spontaneously, but......oh well, I can't find the words.

The moment near the end when the Joker realized that his plan for (spoiler left out) didn't happen, was very interesting as well.

THERE'S an image for ya: Ernest Borgnine or Abe Vigoda playing The Joker in some Bizarro World Batman movie. Oh, I would SO love to see that!

Oh, shit. Now that image is embedded in my brain.

Glad you didn't re-electrocute yourself. I just saw a re-run of the House episode where he crams a switchblade into a wall socket so as to prove to himself (maybe) that there is no Afterlife. Didn't look fun.

I'm still laughing at the Gore-Al joke. Or is it true? Gore-Al always seems to know more than the rest of us know.

House did that? That reminds me of the time in French class in high school when this guy folded up two pieces of aluminum foil, stuck one each into the socket holes, and pushed them together with the erasure of a pencil. POOF! Good times. :o)

Here we go! Copy and spread!

The NEW "Fishnets For Vigoda" image is HERE!