The Place With the Paintings & The Mannequin With Her Butt Exposed 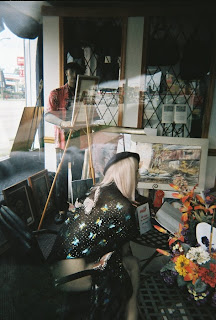 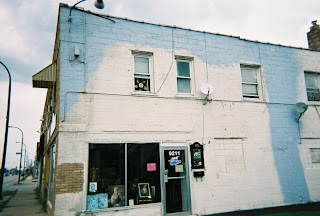 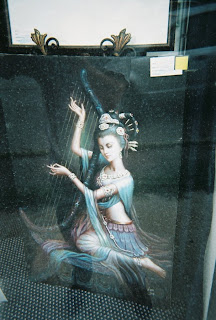 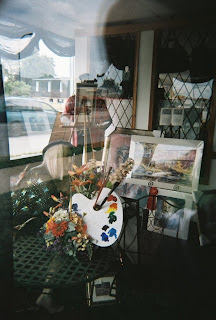 Awhile back, I posted a photo of this art store on 93rd & Cicero with a mannequin standing up to look as if he was painting on a canvas. Well, I took the time to actually walk around the place and peek inside. The place is always closed, there are business cars and phone numbers listed in various spots on the door and windows. I was surprised to find the other mannequin, the female one, and bottomless in the way of apparel. The building is one of my favorites in the area, the art place wasn't there until a few years back. I love the fans in the upstairs apartment windows, plus the fact that it looks like they never really bothered to paint the entire building, quitting as they saw fit. From where I took the photo, there was a Denny's behind me, and on the next block, blocked by the art building, is a Hooters. Yes, indeed, I live in one classy suburb. Check out the painting of the woman with the harp. If it wasn't in the window, I would never have stopped to look at the place. (I remember the moment clearly, as I had to walk from 95th to 87th in the dead of winter, having missed the bus. Snowplows had dumped everything on the sidewalks and I had to stop every few mounds to catch my breath. The valley between two of those mounds was the part of the window that had the harp painting. It was well below zero with the wind chill, making the scene even more surreal.) I would love to be able to walk around inside the place, though. Actually, I would love to live in one of the apartments above it.
Posted by Wayne Allen Sallee at 8/14/2009 12:00:00 AM

The painting of the woman with the lyre is amazing.

I don't know if you've ever read Peter Bagge's HATE comic, but that place looks like Buddy Bradley's collectibles shop. Can't recall if he lived OVER the shop, or behind it. But something like that.

Wonder why someone went to all the trouble to stock the place and then never opened it?

There's a place similar to that (in spirit only) here in Charlotte. A guy opened a used bookstore in a hole-in-the-wall shop. Carpenter by trade, he wasn't that into retailing so he sold it to a really weird guy who would sit in the shop all day barefoot either ignoring or being abusive to customers. Then he closed it...but he continued to pay the rent ($100 a month...no shit, I asked the owner) and the store just sat there, the books all going moldy. Where it is to this day. Far as I know, the doors haven't been opened in about twelve years.

The paint job looks like something my mother would do, she never finishes anything that she starts. The walls inside her house look just like that.

That is an eye-catching painting! I want to go inside there too.