And Why Didn't I think Of This? 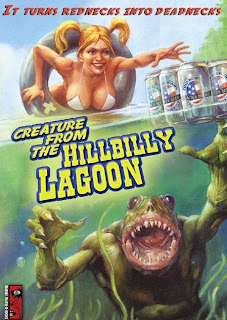 Or G.W. Ferguson, for that matter. Incidentally, its my 350th post. So why isn't anyone commenting anymore. Is it my choice of cologne? Does my breath smell of vanilla NyQuil? Or did everyone discover the YouTube of me involved in a moment of sweet, sweet octopus lovin'?...Wayne
Posted by Wayne Allen Sallee at 8/13/2008 11:57:00 PM

Holy Moses! Is this real? Where I can I rent it? I think it's a documentary about one of the lakes in my area.

I get more comments when I repost my blog on tribe.net than I ever do here. It might be that blogs have swamped the audience and time for reading them, like too many broadsides in 18th century London (which I still think make the best analogy for blogs).
Re. the Hillbilly Lagoon Monster, as charming as it is, we've crossed the line from honest effort gone horribly wrong (as in the B-movies we love) to third generation, self-aware auteurs coming up with high-concept titles. It lost a lot of charm when the parody became the product, and the monster makers were in on the joke.

That *may* usurp that special place in my heart now held by Chopper Chicks in Zombietown....

I would pay good money to see that movie!

Looks like it's a few notches down from "Swamp Thing", and maybe a few up from "The Blood Waters Of Dr. Z". :-D

Oh, yeah--why didn't I think of this! Sure, it's no Beach Blanket Bloodbath or musical comedy remake of Psycho, but still, it seems so obvious to a good ol' Southern boy lahk mahse'f!

I'm still fond of "humanoids from the deep." And "when Hell came to Frog town."