What's Really Behind The Looking Glass 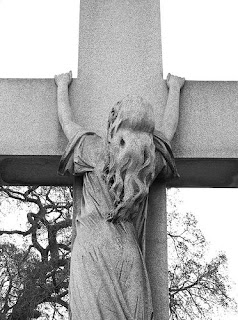 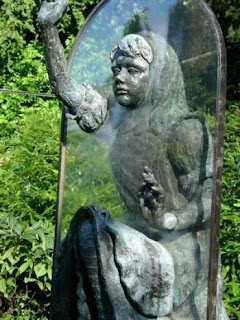 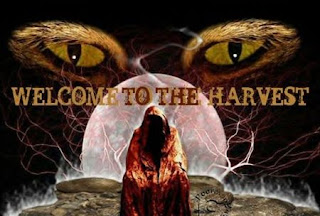 The answer, compliment of St. Boniface Cemetery, up around Ashland and Lawrence in the Andersonville neighborhood. Alice wants you to think you're going through a glass mirror, but on the other side, there's nothing but godforsaken stone and headless girls. Who the holy hell thought this tombstone would assuage anyone's feelings towards someone's dying? Welcome to the harvest, people. And remember what the dormouse said. Eat your head.
Posted by Wayne Allen Sallee at 7/23/2008 10:22:00 PM

By God, that is freaky. I'd get shivers looking at that thing when I visited the cemetary.

Because one pill makes you tall and the other makes you small, and the one your momma gave you won't do a thing at all...

there's a cemetery out in the near west burbs where they bury the Chicago Cardinals that's as creepy as it gets for tomb stones. One is of an entire turn of the last century Italian family having dinner, complete with foods on the white marble plates. the whole damned thing swivels to face the sun. There's also a life sized marble carving of a woman who died on her wedding day in the early 20's. Her mother had her carved in white marble in her wedding dress holding her bouquet- the little boy's tombstone withe the dog sitting on it looking at his name is every bit as creepy as your faceless girl. I always wonder is the dog keeping the kid in the grave, waiting to eat his bones, or just some demented idea of a happy afterlife with a dog sitting on your head --Mike

God. I love those sculptures. I wish there was a cemetery near me that had something that creepy. Outstanding. Maybe I'll leave instructions for something horrifying as my tombstone, something bizarre enough to give people nightmares.

Although it IS neat in ways, I see your point...

My all-time favorite cemetery for walking around in at night is the one at Christ Church on Sea Island, Georgia. When I was a teenager, we used to head over there in the depth of night and walk around in it. It was terribly cool. Just enough light from a streetlight some distance away to let you know that you were in a very old (by US standards) cemetery. Lots of cool carvings and headstones and such. And quiet. One of the quietest places I've been:

I *love* that creep-ass tombstone. Me, I want a statue of elderly-me wacking the Angel of Death with my cane!

So cool! And it's not all that far from me.

I have photos from a fairly recent stroll through Graceland (the cemetery, not the white-trash palace of kitsch), but not even that creepy death statue comes close to those photos!

OK, I've been seeing that Alice statue a lot lately via many diverse sources, and now here. I'm putting that down to another one of what I call, "Cosmic Cluster Occurrences". :-o