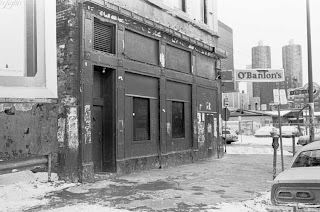 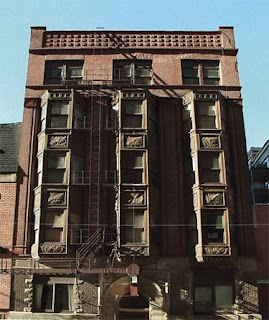 At work today I was talking with the Xerox Repairman Supreme, Joe Flores, and we got to talking about the old days when we could live off just about nothing and enjoy ourselves. Joe Curtin, my boss, brought up the old Jaxter Hotel, at 58th and Kedzie. That was a dive with a strip bar in the basement and you could pretty much see bar fights like in "Bad, Bad Leroy Brown," knives and poolsticks and all. But back when I worked with the Elvis band, we'd leave our gig at Laurel & Hardy's on 63rd and St. Louis and hit the Jaxter. One guy in a jumpsuit, the rest of us in sdilk shirts and suitcoats. Looking back, I could've passed for Mr. Furley. The looks we'd get, but we got our beers at a scoot a piece, and those were the days. Joe Flores said he was happy with a pack of smokes and a longneck. I've also posted a photo of O'Banion's, which used to be on Skid Row in River North. It was a late night place that ranged from punk to new wave. I recall getting contact highs from pot smokers clothing and opening bathrooms on kids dry humping. Again, dressed as we were, this time from playing a dive that's long gone. As is O'Banion's and the Jaxter. Ghosts of the city again...Wayne
Posted by Wayne Allen Sallee at 2/07/2008 09:33:00 PM

Those were the days! A more innocent time!

Dude, I remember this one time I was dry-humping this chick in O'Banion's and Mr. Furley opened the door...

Wow, with that photo of the Jaxter you may have given me an idea for a setting I need in something I've been working on!

I'll name one of the characters who start growing tentacles out of their torsos after you.

I might have to move the Jaxter (or whatever name I come up with) further down Kedzie so it will be closer to Marquette Park. I plan to have a large, tentacled thing living in the lagoon.

And the time will be more around 1973. The story is total madness, but that's what those times were for me. I never wanted to write about the old neighborhood before -- I could only think of it as being the place I wanted to get away from. But now that it's becoming just many ghosts, I feel a need to bring it back just to prove to unbelieving friends and in-laws that such places existed.

As you said in an earlier e-mail, you can feel as if you're living closer to Kankakee than Chicago. I once described Garfield Ridge/Clearing as a "distended" area of the city to a poet I knew at U. of I. and she thought I was joking. Brighton and McKinley Parks were more like "the city," but still a long, long way from Lincoln Park, Old Town, the Gold Coast etc.

And, as per your earlier e-mail, the weather these past few weeks is getting to me too. Every alley is a slippery gauntlet, the suburbs up here have already run out of salt, and the barometric jumps are playing havoc with my arthritis and migraines. And I know you're in ten times worse a situation -- hang in there! That jerk Schwartz said tonight we'll be getting more snow tomorrow.

If I wanted this kind of weather, I'd have moved to Buffalo! Dang!